Ariane with the Golden Fingers

The battle was brutal and losses were high. Ralph the Brave, Robin of the Forests, and me, Ariane with the Golden Fingers, were the only survivors on our side. But we had no time to mourn the fate of our friends. We had to get back on the road.
We crossed the valley of the crows where the evil wizards cast spells on us. Thanks to my quick reflexes, I pushed them back and exterminated them.
In the forest, you have to look out for trolls. But Robin knows how to deal with them by shooting poisoned arrows in their direction.
At last Wintersfall Castle, the residence of the merciless Lord Wladym, came into view. That was where our King was being held prisoner. Ralph broke down the door with three blows of his sword. We advanced side by side, our swords in our hands, ready to fight back if we were attacked. We had to be very careful. Wintersfall Castle is full of traps devised by the devilish imagination of Darius, Lord Wladym's architect. Just one wrong move and a blade might come down and slice off our heads. Or a sheaf of arrows might pierce our bodies... 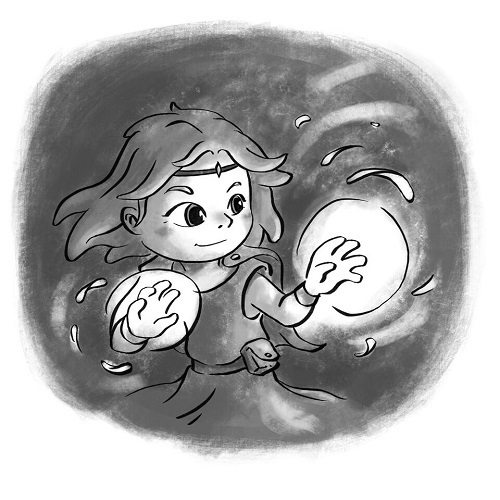 Suddenly, I heard a voice. It was saying my name. My companions did not seem to hear it. What was this delusion? What strange creatures were trying to make me deviate from my path? The Eeries? Unless it was a trick by some fiendish goblins...
"Ariane!"
The voice was getting louder. We were nearly there. Our King was behind the door. After escaping so many perils, we were finally reaching the end of our quest. But suddenly we were plunged into darkness. Total darkness. What was happening? Had somebody cast a spell on me to make me lose my sight? My companions had disappeared. I was no longer at Wintersfall Castle. And I knew exactly who had played that nasty trick on me... Worse than the witches of the marshes, the mermaids of the southern seas, and all the gnomes and goblins put together. This monster was called: "Mom!"
She appeared in the doorway to my room.
"Mom, did you really do what I think you did?"
"Yes," she replied, "I switched off the electricity."
"But I was just about to rescue the King from Lord Wladym the Terrible!"
"And I have rescued my lasagna from getting burned to a crisp! I've been shouting for you to come to dinner for the past ten minutes. If you are not sitting at the table ready to eat the delicious lasagna I've made for you in three minutes flat, you'll be on dish duty for the rest of the month. Do I make myself clear, Ariane with the Golden Fingers?"

Please highlight text with your mouse in order to use the audio transcription.

Oops, the selected text contains characters, it's too long!
Please select less than 500 characters in order to use the audio transcript.